THE EXCELLENCE OF TOOL DESIGN

CAMS is a company specialized in the design and manufacture of sheet metal tools. It is a dynamic company that works in synergy with “La Tecnomeccanica Sud“, focused on special productions, assemblies and mechanical processing.

Both companies are a point of reference for national and international manufacturers, especially in the world of 2 and 4 wheels.

We are a proud  pioneer in engineering and construction of tools for sheet metal deformation, CAMS has daily increased its work, specializing in the design and construction of tanks, unloading systems, frames and complex components. So much so that today CAMS boasts advanced design systems that allows it to process increasingly complex deep drawing dies with presses with pressures up to 800 tons.

“Through a careful analysis of the project, of the industrialization process and also thanks to prototyping, we place our customers in the best condition to achieve their goals”

All successful business history, for some reasons, are born in a garage. Maybe because it’s a much more private place than the home, a place where genius meets opportunity. Fiore Panaccio and Ettore Liberatoscioli, our two partners in 1975 started what was an activity based on their imagination right in a garage. Since there were no businesses of tools production in that particular area, they planned to produce them for what their previous employer was. So it was that slowly first they began to work for Honda and then for the best manufacturers. In 1989, they decided to leave the place where the story began and move to Mandrone.  A production unit of about 3,000 square mt. , divided between C.A.M.S. and La Tecnomeccanica sud. The production continued to expand a lot for more than eleven years, and in 2000, a further upgrade was necessary with the moving to the Ex Coca cola plants in Fara Filiorum Petri (CH). Today with about 25,000 square mt. and 250 employees, the story continues also thanks to the admittance into the company of Fiore’s sons, Stefano and Lorenzo Panaccio and the sons of Ettore, Terenzia and Camillo Liberatoscioli.

C.A.M.S. since more than 40 years is always looking to improve processes, tools and industrialization in an endless process of know-how acquiring and exchanging with the customers.

The success of the two companies is also determined by constant professional growth, constant technological updating and strategic partnerships consolidated over time.

But the secret of true success is based on human capital, made up of competent and professional people, always ready to answer to market needs, transforming them through inventive and research work into unique and competitive products.

All the staff, both at Cams and at LTS, carry out continuous high-level training in collaboration with regional institutes and external research company that always guarantee updated skills.

Constantly at the forefront for technology and design capacity, CAMS complies all the certifications of the standard for management systems.
ISO 9001:2015 / ISO 9001:2008.

This Certification is valid for the following application field:

Design and construction of tools and mechanical equipment. Prototyping and co-design development of sheet metal components with 3D laser cutting and stamping equipment. 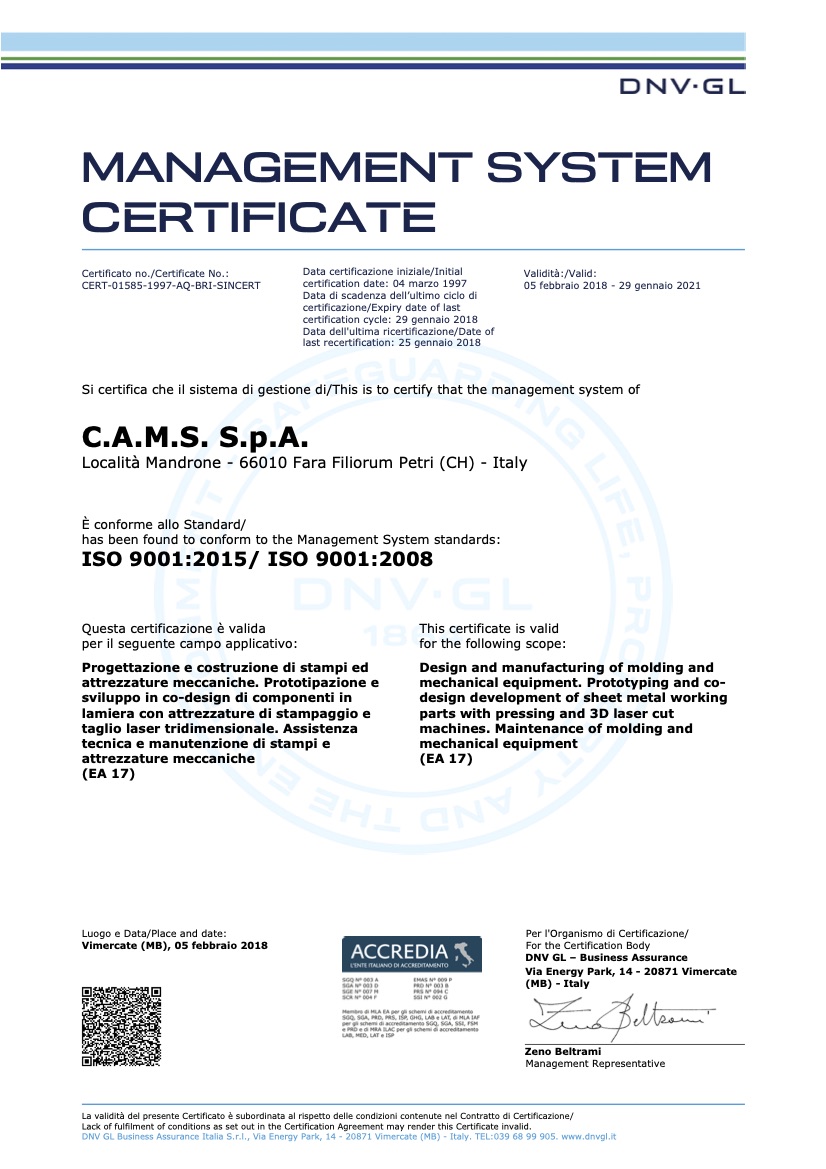